Srini CR discusses how we can ensure that the internet is a safe space for information, sharing and engagement by utilising blockchain as a solution in balancing online anonymity and traceability. All too often, the Internet is actually being abused to spread misinformation and fake news and hence regulation is important, which this blog further investigates.

We are firmly in an age where people have access to infinite amounts of data and resources online, designed to make everything we do in our professional and personal lives easier, and often faster. The internet is readily available for many people; it can be used for a positive change as individuals and communities can head online to stand together to speak out on issues that affect them. At the same time, the internet is also increasingly being used to spread misinformation and troll other users. The key challenge now is how to ensure that the internet is a safe space for information and sharing and engagement.

Is regulation the answer?

The lack of online accountability has fuelled the spread of fake news and cybercrimes while at the same time the online platforms such as I-Witness and SGSecure have empowered users to exercise vigilance by reporting crimes and harmful activities.Yet there is still a need for the industry to determine how underlying issues relating to online privacy, anonymity and accountability are addressed or even regulated.

“Privacy, anonymity and accountability all start with some form of traceability.”

Enabling law enforcement agencies, for example, to access conversations on services like WhatsApp is a highly complex issue which I don’t claim to have a solution for. But it’s clear that constructs would be needed which would enable traceability while also recognising people’s right to privacy and freedom of speech.

As far as regulation goes, Singapore stands out for adopting legislation goals to tackle the proliferation of fake news and spread of inaccurate information. The Protection from Online Falsehoods and Manipulation Act (Pofma), gives the government the power to remove falsehoods online or demand for corrections to be put up alongside it.

“The law also gives the government the power to order technology companies to block accounts that are spreading untruths.” 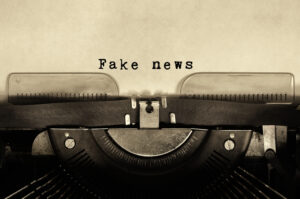 For individuals, the penalty for making or altering bots for communication of false statements of fact in Singapore is a jail term of up to 6 years, a fine of up to $60,000 or both.

The obvious challenge is of course that fake news can spread in a matter of minutes. So, this law is likely to be more effective as a deterrent for those who might consider sharing misinformation on social media, rather than as a means to prevent the fake news reaching millions of users after it has already been posted online.

Alongside stricter laws, blockchain technology could be leveraged to combat this problem too. Blockchain is defined as a decentralised, distributed, and often public, digital ledger that is used to record transactions across many computers so that any involved record cannot be altered retroactively, without the alteration of all subsequent blocks.

“In layman terms, imagine a spreadsheet which tracks all changes which spawns millions of other spreadsheets the moment the previous document gets altered.” This technology could make users more cautious about what they post online as their movements can be tracked. Also, it removes the possibility for an external intervention as the records cannot be altered retroactively, without the alteration of all subsequent documents. So, blockchain could potentially help act as a powerful deterrent for malicious activity online, and verify and track the origins of fake news.

The New York Times is leading the charge in the fight against fake news, exploring how a blockchain-based distributed database could be used to prove the authenticity of images in journalism. The thinking behind its innovative “News Provenance Project” is to show how easy it is to manipulate photos and “then circulate widely through digital spaces with few brakes applied from social platforms, messaging apps or search engines.”

“Ultimately the project aims to empower users to know where any photo comes from and whether it has been changed in any way.”

While there is an ongoing, at times philosophical, debate between the technology industry and governments to find a way to balance anonymity, privacy freedom of speech and traceability, it is evident that technology is both a friend and foe when it comes to information sharing online. The solution is therefore likely to involve a combination of regulation and greater efforts by online businesses to prevent the spread of fake news and other malicious content.

Ultimately, the benefits of the Internet far outweigh the challenges it faces today. So, my hope is that in the end, the Internet will be a safer place for people worldwide to engage with one another in a constructive way and to access a wealth of information and diverse opinions.

Read another blog by Srini CR on how the future of data will impact our privacy and anonymity here.