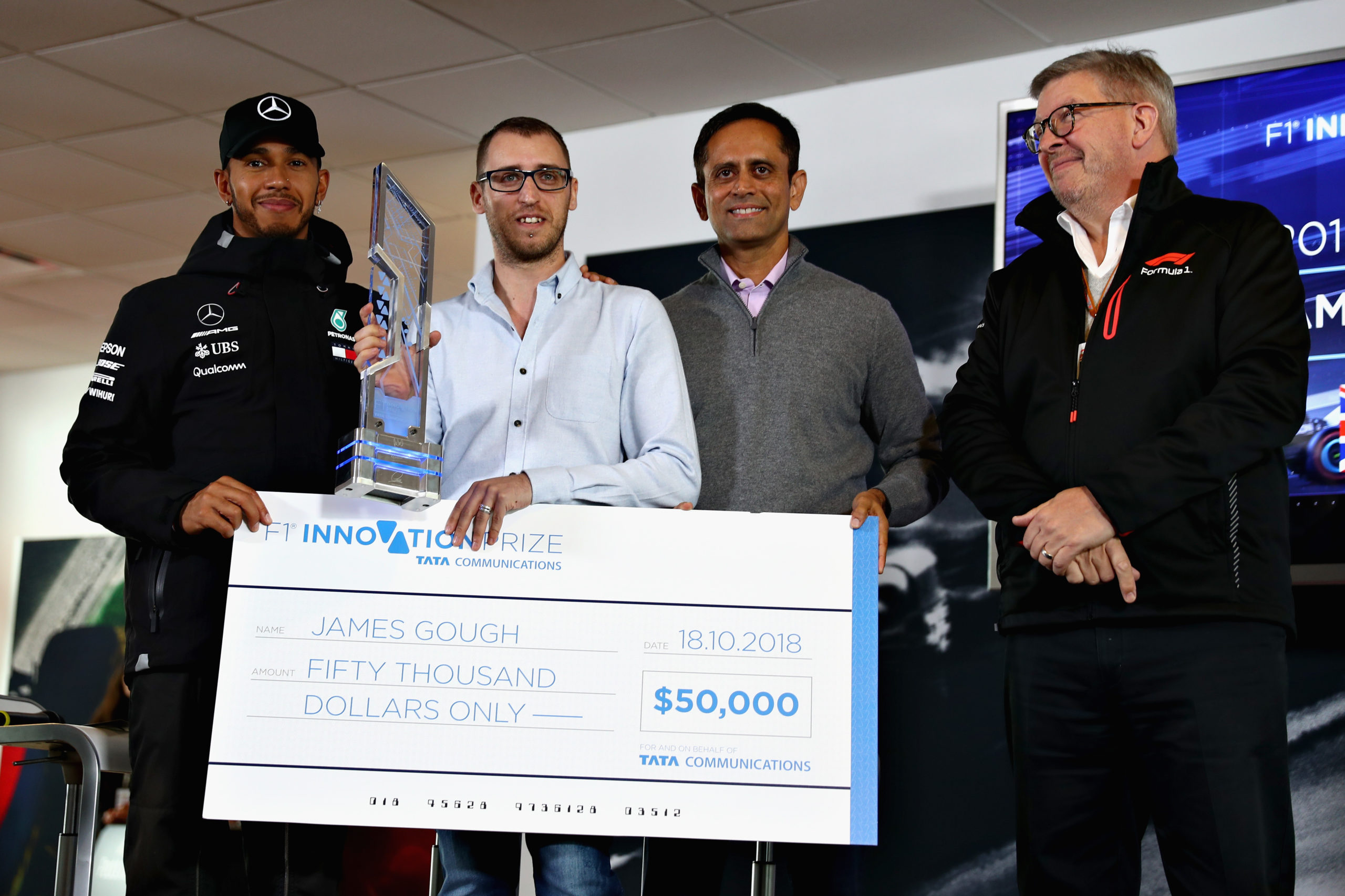 “We want to break down the barriers of language and technical know-how so that more people around the world are able to immerse themselves in the greatest sporting spectacle on earth. We’re continually looking for ways to bring more fans closer to the sport. That’s exactly what James’ winning idea seeks to do too in a truly innovative way.”

In a world-first for global sport, this year’s winning idea will be incubated with the intent to prototype it at Formula 1®’s Media & Technology Centre in the UK. During the incubation, James will work closely with Formula 1® engineers to develop his idea, which – as the ultimate demonstration of fan engagement – has the potential to shape the future of the sport.

F1® Innovation Prize is a joint initiative by Tata Communications, Formula 1® and Mercedes-AMG Petronas Motorsport. James beat out fierce competition from around the globe with his Virtual Smart Assistant idea, which stood out for the esteemed panel of judges. The app, which functions as a fan’s personal F1 guide, provides seamless, instant access to insights on each driver, team, car, practice session, qualifying or race-on-demand. As a result, it could help turn new fans from casual viewers into F1® experts, while offering hardcore fans a whole new level of insights. Excitingly, not only is the proposed solution integrated with existing smart assistants including Amazon Alexa and Google Assistant, it is also equipped with artificial intelligence (AI) capabilities. So, the more a fan uses the Virtual Smart Assistant, the more it learns about their preferences, customising the information it offers accordingly.

The ‘My F1®’ theme of this year’s competition is part of Formula 1®’s mission to enable everyone – from trackside fans to the most casual armchair viewer – to create their own, more customised F1® experiences using different data points and digital platforms.

“We want to break down the barriers of language and technical know-how so that more people around the world are able to immerse themselves in the greatest sporting spectacle on earth,” said Ross Brawn, Formula 1®. “Through new features like the Halo graphics and live events like our F1® Festival series, we’re continually looking for ways to bring more fans closer to the sport. That’s exactly what James’ winning idea seeks to do too in a truly innovative way. I look forward to seeing his concept come to life in our Media & Technology Centre.”

“This is such an exciting time for the sport, with more and more ways for people around the world to get close to the world of F1® – through social media, online, and of course the F1® Innovation Prize,” said Lewis Hamilton. “There’s so much happening at any given second during a race. James’ idea was my favourite because it lets both die-hard fans and those who might be new to the sport make sense of it all and really immerse themselves in the action.”

“I’ve been a huge fan of F1® since I was a teenager, but never in a million years did I think that one day I’d get the chance to be part of the F1® circus – that’s why winning means so much to me,” said James Gough. “Through my app, I want other fans to get a glimpse of being on the inside of the sport they love. I hope that my idea will help give fans access to all the data they want, and that they’re able to use the data to not only see what’s happening but to understand why it happened. It should lead to more people getting involved in the sport.”

“During the last five years, this competition has shown us how much untapped potential there is in the global community of F1® fans, and now we’re taking this initiative one step further by turning the winning idea from concept to reality,” said Mehul Kapadia, Managing Director of Tata Communications’ F1® business and the company’s Global Head of Marketing. “From bringing half a billion fans worldwide the Grand Prix action each season to testing in action cutting-edge technologies like UHD video and virtual reality – we’re excited to be part of the digital transformation of this great sport. Like with other multinational enterprises, it’s all about supporting Formula 1® as the organisation leverages the latest tech innovations to grow its global audience and open up new revenue streams.”