The cloudification of business

By now we know that the cloud is firmly embedded in the enterprise. This was highlighted by Tata Communications’ recent research, which explored ‘the reality of cloud’. Indeed, only 3% of enterprises claimed not to have implemented any type of cloud solution. It’s no exaggeration to say that this widespread ‘cloudification’ has completely transformed the business world over the last five to ten years.

One of the most significant changes has been to the way we work. It may seem trivial that you can access email, work documents and software applications wherever you are and at whatever time. However, the flexibility and freedom that this affords would have been unthinkable just a decade ago. This access has meant that employees are now more dispersed, but paradoxically more connected than ever before.

As a result, organisations are no longer the centralised, command and control structures that they once were. Instead, they are coming together virtually – often from across different countries or continents – in fluid, flexible teams, to find solutions to problems. They then disperse just as quickly. This has meant that collaboration has improved, with dramatic increases in productivity and efficiency for many businesses. In fact, around seven in every ten people asked reported that the cloud had led to increased productivity within their organisations. 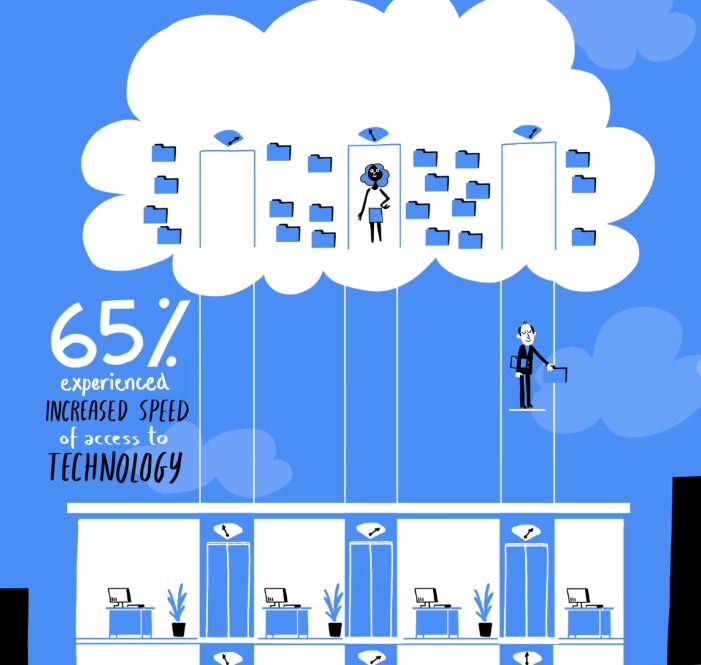 Another effect of the dramatic adoption of cloud computing among businesses has been a marked increase in the computing power available to companies – at a much smaller cost. This has brought down barriers to entry in many industries by putting huge amounts of computing power into the hands of businesses of all sizes, fundamentally changing how these firms go about their business.

For example, small businesses now have access to the same tools as their larger competitors, be it for back-end operations such as CRM, accounting and payroll, or more core business operations, such as complex design software in a graphic design firm. This has dramatically levelled the playing field in many industries by taking away a key competitive advantage that larger firms previously held.

This has caught many of these larger businesses, which have less flexibility and adaptability, completely cold and has allowed smaller, more nimble businesses, focused on greater choice and customer satisfaction, to take market share. Almost 57% of those who expected an improvement in customer satisfaction from their cloud adoption reported that it had met or exceeded expectations. What’s more, two thirds also stated that it led to reduced delivery times to clients and partners.

One of the other key effects of cloud computing has been that the IT department no longer exclusively controls IT and computing within their organisation. Effectively, IT has been democratised across the business. Indeed, Gartner analyst Laura McLellan recently caused a stir by predicting that, by 2017, the CMO would outspend the CIO. In Tata Communications’ research, only one third of IT decision makers said that the demand for cloud had come purely from their own department.

All of this has meant that a variety of different departments are using IT as a key strategic driver in the search for competitive advantage, new customers and growth – not just as a tool that enables them to simply carry out their daily tasks.

For example, the collection and analysis of large amounts of consumer data, enabled by the cloud, is now a critical component for any modern marketing department. Cloud-enabled HR systems are allowing companies to sift through vast quantities of job applications to find the best candidate, which ultimately benefits the business.

This cloudification has transformed the business world. It has made collaboration easier, resulting in increased productivity. It has helped disrupt entire industries, and it has revolutionised old, outdated business models. It’s therefore unsurprising that 85% of people reported that cloud had ‘lived up to the hype’.

Do you think the cloud has lived up to the hype? Leave your comments below.