One of the winners of our first challenge in this year’s F1 Connectivity Innovation Prize talks us through the value of working in a small and creative team, and describes the story of man and wife meets machine, meets data…

My first memory of Formula One is vivid, despite being around twenty years ago. It was the 1994 Australian Grand Prix and the image of Damon Hill and Michael Schumacher colliding is one that has been set in my memory since, igniting my passion for the sport and the belief that it truly is one of the most competitive environments on earth. My day job involves designing and managing electronic trading platforms, everyday life is entrenched with data. That’s what really jumps out at me about the sport and the F1 Connectivity Innovation Prize; it’s a combination of driver, machine and now more than ever, data.

It’s certainly a sport that has both fan and driver experience at the heart of it, which is clear in its constant nature of innovation. My interest was initially peaked last year when I heard the winners announced, as the sport has evolved the challenge offers the opportunity to create a game changer, which is incredibly exciting.

The interest I have in the sport was enough to make me want to enter, but it was once I had partnered with my wife that we really embraced the task at hand. It’s a partnership of man and wife, of F1 enthusiast and keen designer, which struck a real balance of what needed to be done from both a technical and design perspective. We brainstormed ideas and worked to the background noise of Formula One races, critiquing each thought until we got our winning idea.

It was extremely important that we put ourselves in the mind-set of Mercedes AMG Petronas race engineers; they face multiple challenges and a mountain of data, which is what inspired us to pursue this idea in particular. The first thing they must do is get the telemetry data into their mind as quickly as possible from the point of it being generated by the car, interpret it and determine whether there are any anomalies which could present an advantage or a disadvantage in the race. We set out to create a feature to support the engineer and enhance the technology behind the race, assisting the people of F1 to build on the sophisticated technologies already in use.

With this purpose in mind, and looking at the obstacle from the perspective of the driver and engineer, we decided to apply the machine learning concept to this challenge. By using previous track session data gathered during practice runs, we could create a predictive model for each sensor variable, and if the actual value at that moment in time was outside the predicted range an alert would be triggered to the engineer. The process involved sketches, tonnes of research on the technologies that could bring it to life, and what we would need to construct the application. 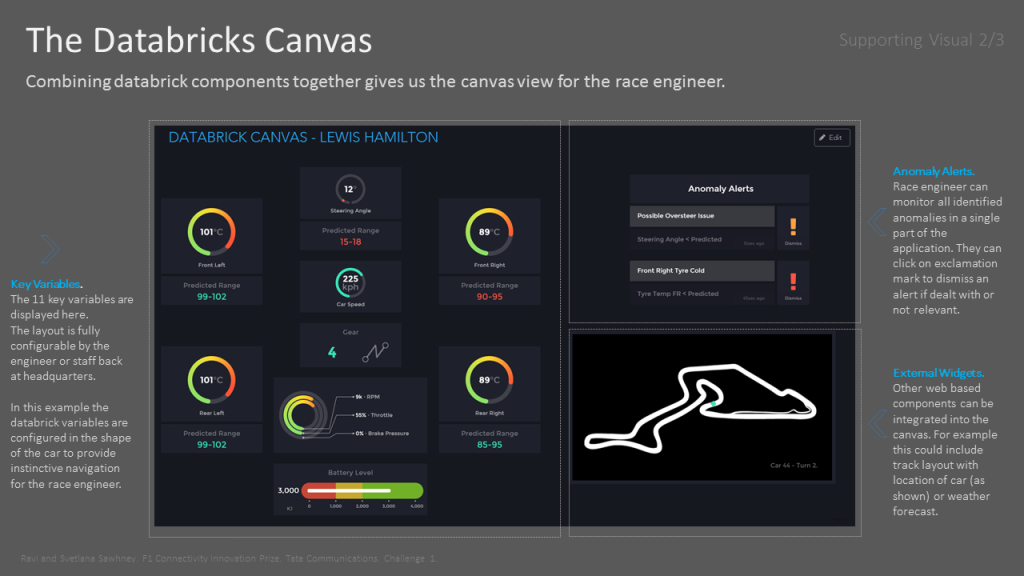 My background means that I am conscious that mistakes can be costly, decisions must be made quickly and depend on a great deal of data being consumed. Our idea centres around predicting the possible anomalies in the telemetry data, which seems simple but the potential advantages are very real, which could have helped the success of our entry. We learnt that sticking to the brief is critical, this may go without saying but we referred to the brief over and over again, to digest the information properly. Also, we would say that anyone considering entering the FCIP works in a small team. This was great for us and gave us someone else to bounce ideas off, while constantly sparking creativity and new ideas.

In today’s F1 environment every bit of data that can be collected has huge value and the lack of on track testing time for the teams has magnified this. Looking forward, I would love to see the fan experience enhanced even further by involving the fans that bit more, with Formula One working with its partners to push out data during and after the race, it would be incredibly interesting to see the effect these insights have on the experience.

Stay tuned to hear from the other two Challenge 1 winners next week, and register for Prize updates to be notified when Challenge 2 details are announced. You can also follow Ravi on Twitter.