Happy Birthday World Wide Web!  Given the Web’s ubiquitous influence on nearly all of our lives, it’s hard to believe that it’s only been 25 years since  Sir Tim Berners-Lee  set one of the most important communications platforms of all time in motion on  March 12, 1989.

The Web’s growth, and growth of Internet traffic in general has been staggering, and looking ahead to the next 25 years there are no signs of it decreasing. So where does the data suggest we’ll stand when the Web turns 50?  Well, by the looks of the chart below, which shows the global customer traffic on Tata Communications’ public IP network over the past six years, and projected growth for the next six, the curve clearly indicates exponential growth. 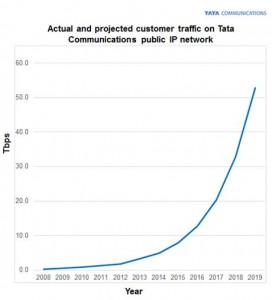 The percentage growth in customer data does vary somewhat year to year, but it consistently averages ~60% per year (+/- 20% in any individual year).  That growth has been a surprisingly consistent, but will that continue?  Let me give you my views on this question.

Video consumption has been a very large driver of growth in the past, but I believe two additional trends will contribute significantly to the growth going forward.  The first  is the cannibalization of audio-only conferencing/calling with video.  This real-time video conferencing/calling will, over time, substitute and replace a significant portion of audio-only calls.  We are at the very nascent stages of this transition, so there is considerable room for growth here.  And considering even just a standard definition video call is at least five times more expensive than an audio-only call, this transition will provide considerable fuel for growth.

The second trend is the shifting dynamic of how consumers will view content, taking in less “broadcast” content and more “individual” content. Over the next 25 years, this trend will create a world of unicast video consumption, characterized by an influx of consumers that view video individually and on demand – and not via mass broadcast.  This transition from the predominant broadcast world of today, to the unicast world of tomorrow will be a second large driver of growth.

Of course this will all be further enhanced by mobile demands.  As I wrote last fall, Deloitte is predicting 4G subscriber numbers to triple in the coming year, as compared to 2012, reaching nearly 200 million people – all driven by customer demands for high-quality video viewing and content consumption experiences.  Now that’s just one aspect of mobile growth over the next 12 months. When you start to factor in traffic growth projections for things like machine-to-machine technology, cloud computing and cloud storage, all of which have shown consistent growth rates over the past several years, one can start to imagine the sheer size of global traffic when the Web turns 50.

So cheers to Sir Tim and the last 25 years of WWW.  As for what its future growth means to network design and capacity going forward, I’ll explore that question in my next blog.