Capturing the curtain moments of F1

Jody Allen and his team are celebrating their podium position as Grand Prize winners of the F1 Connectivity Innovation Prize. Here, Jody discusses his love for the sport, describes the team’s winning idea and talks to us about his ultimate Formula 1 moment…

How long have you been a fan (or interested in) F1?

Since day 1 really. Being named Jody (after Jody Scheckter), Formula 1 was a strict fortnightly ritual in my house growing up and some of my earliest childhood memories are of watching races with my dad.

When Ayrton Senna took his first win in the wet at Estoril in 1985, I became a fan for life and followed him avidly from that point onwards. I went to my first race in 1988 and saw Senna take the victory at the British GP, on his way to winning the championship that year. I went to Silverstone with my dad and uncles every year from then onwards and one of my enduring childhood memories (when I close my eyes, I can still see it) was seeing Senna fumble a gear change at Beckets where I was spectating. He spun off into the gravel trap backwards and watched the rest of the race sitting on the tyre barrier next to his stricken McLaren. I don’t know who was more distraught, Ayrton, or me standing just behind him…

How did you approach the challenge?

We wanted to create something that F1 fans would actually want to use. To fans, the F1 archive is not a regimented database of events, it’s a treasure trove of incredible stories, rivalries and controversy. We wanted to give fans access to that treasure trove, and have the indexing happen as a result of things they do naturally anyway: Debating the greatest moments in the sport’s history.

What is your ‘day job’ and how did your day-to-day work influence your approach to the challenge?

We all work together at Ostmodern, a company which specialises in designing and building innovative video on demand products. We tackled the challenge in our spare time, but approached it just like any other project. We’re really used to working together to quickly come up with concepts and turn them into achievable projects, and that’s exactly how we approached the challenge

Walk us through your winning idea for cataloguing FOM’s archive footage – what does it achieve? What innovative technology and digital indexing did you use to develop your concept?

The real innovation in our proposal is not down to the technology involved, but the fact that it is based around activities users want to do naturally – discuss and debate F1®’s greatest moments. We proposed a cumulative, three-phased approach. This way, the integrity of the data is improved at a controlled rate across the entire database, with each phase providing the groundwork for the next.

Phase 1 focusses on tagging each video asset with the relevant season and circuit, and then using Optical Character Recognition to automatically scan FOM overlay graphics on the videos, extracting data such as lap numbers and race order at specific points during in the race.

Phase 2 involves a series of competitions, encouraging fans to submit their ‘greatest moments’ clips around a theme each race weekend throughout the 2015 calendar. With the archive video files now searchable by season and circuit, fans can do this by simply logging on to the archive, finding the relevant race, using the simple editing interface to find and clip their moment, and adding some additional, predefined data points. As each new clip is created, that particular moment in the archive is also indexed.

In Phase 3, now with a critical mass of users and clips, the site is left to grow organically, with the community continuing to create themes and competitions as they see fit. 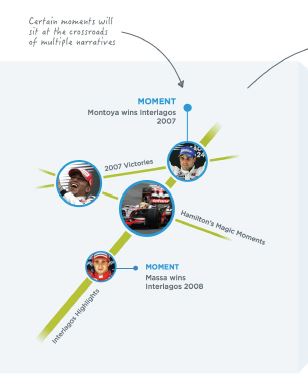 When looking through the footage what was your ultimate Formula 1® moment?

There are so many incredible moments in the history of F1 that we all quickly realised that it’s impossible to choose just one. However, in acknowledging that, we made it the underlying concept behind our proposal.

Everyone has at least 20 moments that they can relate immediately and knitting these together through different contexts to create narratives is what makes them relevant. For example, the Senna/Prost collision at Suzuka in 1989, will be mentioned by many fans as a defining F1 moment. However, some will group that with other moments for differing reasons. One person would add that moment to a wider narrative about the Prost/Senna rivalry, whereas someone else would include it in a narrative about championships which were decided by a collision. Someone else will then include it in a ’Suzuka Classic Moments’ narrative and then someone with a completely different perspective would add it to a narrative about Formula 1® safety.

What was the greatest challenge you encountered when developing your idea? How did you overcome it?

It was certainly challenging to articulate our ideas in just 1000 words. This limitation proved helpful in focussing how we explained our phased approach, breaking it down as clearly and concisely as possible. Coming from a design background certainly had its benefits – supporting diagrams and user journeys enabled us to visualise our solution in a way that words alone couldn’t.

Do you have a favourite moment from the history of F1? Tell us about it below.