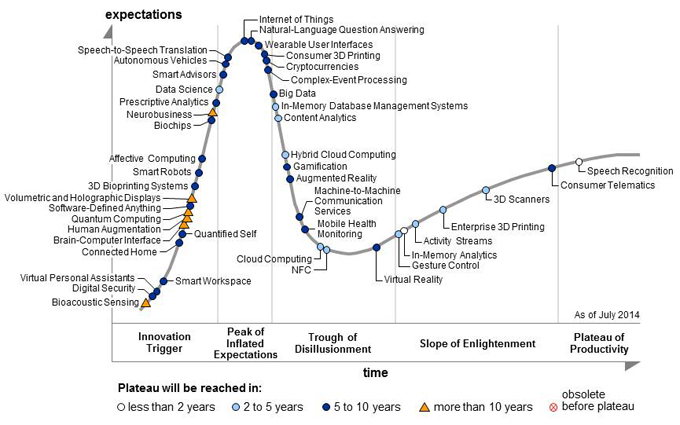 In reality, many products or services never reach the end of this cycle, as the disadvantages prove insurmountable and mainstream adoption never kicks off. Take QR codes, for example. They were hyped as the alternative to coupons and very convenient. In reality, most consumers were either confused by them, or tried them only to find they often didn’t scan properly. As QR codes demonstrate, if a technology isn’t reliable, it stands very little chance of taking off.

It’s not until the product or service has been tried and tested that skepticism can be relinquished and it’s really possible to determine whether or not something has lived up to the hype. That’s not to say that new technologies never live up to the hype. According to recent research carried out by Tata Communications with Vanson Bourne, the cloud has now passed the hype stage – its journey along the plateau of productivity is underway, and as such, the market is now reaching maturity.

Who would have thought that 97% of companies would now have cloud services as part of their infrastructure? Furthermore, by 2024, enterprises predict that, on average, 58% of their compute and data storage will be held in the cloud, compared to 28% currently.

The initial concept of an “intergalactic computer network” back in the 1960s, through which everyone around the globe would be interconnected and able to access programmes and data remotely from any location, developed further with the introduction of Salesforce.com in 1999 and Amazon Web Services in 2002. This was the birth of a new generation of cloud technology, which would change the way we work forever. And it’s still going strong today.

The cloud is generally seen as the de facto standard when commissioning new services, and there are many reasons for this, most of which hark back to the original hype from vendors.

Tata Communications’ research has found that most users’ expectations of the cloud were met, or even exceeded – a staggering 85% believe that the cloud has lived up to the hype, and in some cases the cloud has over-delivered on the original promises. Almost one quarter (23%) go as far as to say that they have seen benefits they did not foresee.

Some of the main benefits that the cloud hype proclaimed are return on investment, cost savings and reduced lead times. When it comes to ROI, 96% of enterprises say that they have seen some return since moving to the cloud. This is, in part, due to the fact that the upfront cost of investing in a cloud solution is a lot lower than the cost of an on-premise storage solution in a data centre.

The cloud is not prohibitively expensive for enterprises, a claim that is reinforced by the 98% that believe they have realised savings since migrating to the cloud. These savings are a result of one of the greatest advantages of cloud solutions – they can be switched on and off as required, meaning users never pay for more than they require, thus saving money.

Perhaps in the case of the cloud, the hype wasn’t loud enough. Marketers are inclined to over-egg the pudding, making outlandish claims that inevitably leave the reality a disappointment. Perhaps in this case, the cloud wasn’t bigged up enough – rarely are expectations exceeded and advantages quite as marked as with the cloud.

Watch a short video of research highlights, or visit tatacommunications.com/cloud for the full report.

Has cloud lived up to the hype for you? Tell us in the comments below.