A touring circus of fuel and passion

Paul Clarke, F1 Connectivity Innovation Prize winner, comments that F1 is the pinnacle of all motorsport and predicts that in-race data analytics will be a seamless operation in the future.

I’ve been an F1 fan since the late 1980s. My father follows motorsports closely and my whole family has been drawn into it, including my wife, with whom I regularly attend the Melbourne Grand Prix.

My earliest F1 memory was seeing Nigel Mansell’s tyre blow in Adelaide, 1986. I was too young to understand the extent of the impact this event would have, but the memory of it still makes the hairs on the back of my neck stand up.

There is no question that F1 is the absolute pinnace of motorsport, where the best engineers and the best drivers compete on a global stage. Motorsport is unique, a touring circus of fuel and passion. Every race, every session has its own challenges and as a problem solver and innovator, I found the concept of the F1 Connectivity Innovation Prize intoxicating.

The solution I proposed is designed to leverage the proven capabilities of traditional web technologies with the addition of modern protocols and concepts to produce near real-time, low latency communications and form a consolidated view of quantitative and qualitative data sets.

I called the concept Signals and Streams. Signals refer to data collected from multiple sources, which needs to be displayed unambiguously to meet the challenges faced by trackside engineers. Streams is a concept borrowed from micro-blogging platforms such as Twitter, which presents messages from users, interpreting the data and events in real-time.

Finally, the platform includes an element of machine-learning, using a concept called ARROW (artificial recognise-react oriented worker), which provides an autonomous analyst to compute vast amounts of data and scenarios based on incoming Signals and communicates with the team via Streams.

As a specialist in user experience and IT architecture, my thinking behind the platform was inspired by the recent shift towards user-centric design and push-based interfaces. The design uses modern approaches to data visualisation to provide clear, intuitive, instant information and communications to the users. 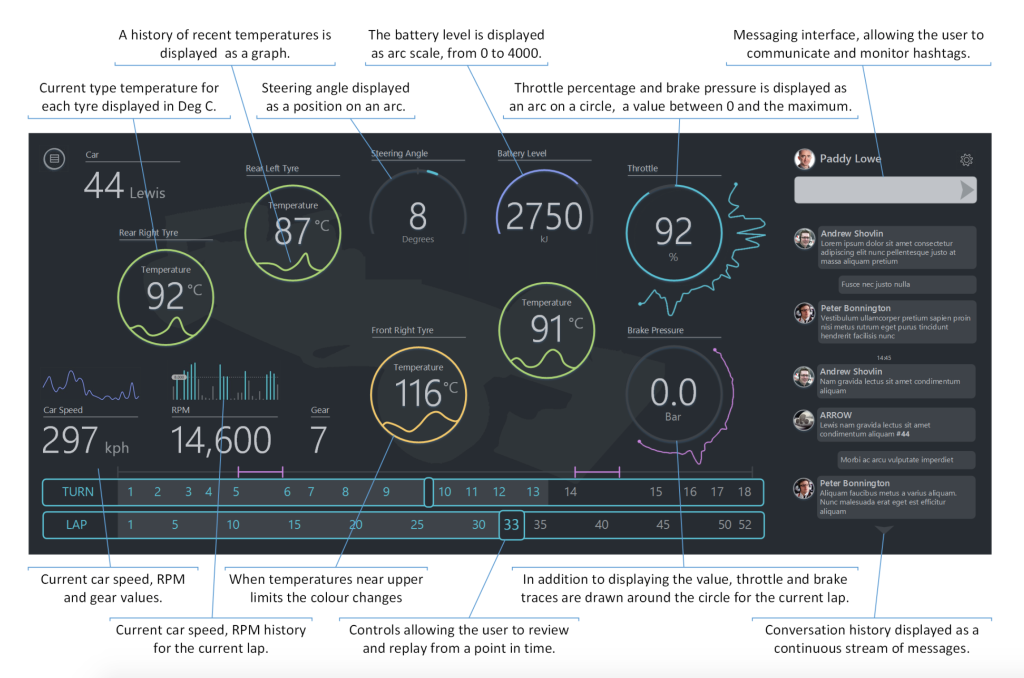 The brief was an invaluable resource in understanding the challenges a winning solution needed to overcome. However, over-emphasising how you answer the challenges can compromise the quality of the idea and solution. So, while my aim was to address both the technological and environmental challenges, I focused initially on forming an idea that would ultimately benefit the team’s performance.

My advice for entrants to the next F1 Connectivity Innovation Prize, is that you need to have a solid and viable concept before you begin your submission. I spent a significant amount of time running the concept through my head and storyboarding the outcomes until I could clearly picture the solution.

By doing so, I was able to develop a proposal that appealed to the end-users, in this case, the engineering team and the driver, assisting the ability of the team to analyse and interpret data, as well as addressing the challenges specified in the brief.

Read the stories of the other winners of the F1 Connectivity Innovation Prize.