Will the future be abundant?

You couldn’t blame anyone suffering “Armageddon fatigue” when contemplating future technology demands. Take a look at the topline numbers: last year bandwidth consumption across the world was the same as the entire decade of the 1990s. At the moment there are around 2 billion connected people and 13.4 billion connected machines, and it’s been predicted that the number of connected devices will hit 50 billion by 2020. How will the network cope?

But if you have read Abundance by Peter Diamandis, founder of the XPrize Foundation, you’ll be familiar with his ‘antidote to pessimism’ theory that technologies are going to solve many of the world’s resource problems over the coming ten to twenty years, bringing about a world of future abundance. I agree, and in the same vein believe that exponential new technologies will mean that the telecoms industry will also stay ahead of demand.

For real life examples, look no further than the news that 5G wireless access technologies have been lab tested at 1 Gbps, and there is currently a trial underway in Newcastle in northern England, with homes averaging 300 Mbps. There are plans to roll this out in the UK in the next two years, with other countries to follow. Meanwhile, a 10 Gbps fibre service was showcased in South Korea this year and in the US, a 10 Gbps service was successfully run over copper in tests. 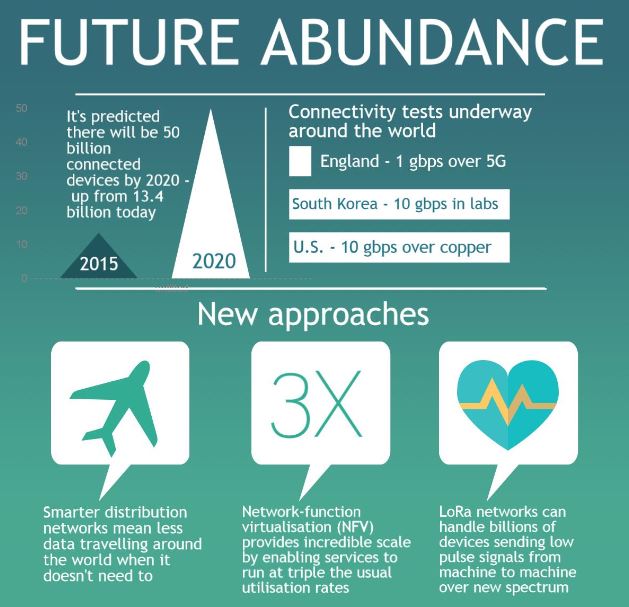 To put that into context, 10 Gbps is equivalent to ten times the capacity the Tata Communications team will use to deliver the Formula One race in Abu Dhabi last month to hundreds of millions of fans around the world. That same capacity in your home. In your hand! The abundance is staggering to contemplate.

It has to be said though, that solving challenge isn’t just about bandwidth speeds, it’s got to be about smarter distribution networks. A couple of weeks ago I was in Mumbai at Microsoft Unleashed with Satya Nadella, where we announced Tata Communications as a strategic partner to Microsoft in the mobile-first, cloud-first businesses of Azure, Skype For Business and Office 365. Satya talked about being the first to market to have a hyperscale public cloud platform here in India. What this means is all traffic to and from the cloud will be within the network in India instead of going back to the US. Given Azure demand is doubling every seven months that will take a massive amount of capacity out of international networks. 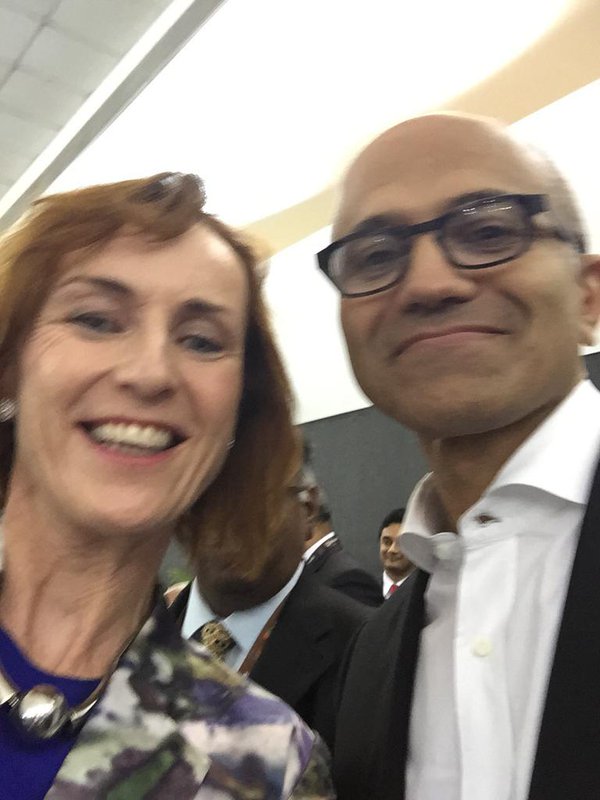 Julie and Satya at Future Unleashed

In another area – who’s heard of network-function virtualisation (NFV)? It’s about virtualising entire classes of network node functions into building blocks that connect to create communication services. Crucially, they run three times the utilisation rates of traditional private ones, so companies such as the likes of Netflix won’t have to guess months ahead what their hardware, storage, and networking needs will be – they’ll have an abundance of scale and customisation options.

I’m proud to say we’ve successfully conducted trials of a network based on this technology for connected devices and IoT applications across Mumbai and Delhi, and we’re now planning to roll out India’s first LoRa network across the country, with full coverage starting in Mumbai, Delhi and Bangalore.

So, just a few near-future solutions to show you that the telecoms industry won’t be beaten by demand from man or machine! Forget Armageddon fatigue — whatever the future brings, we’ll be ready with abundance.