When Joseph Schooling beat his idol Michael Phelps in Rio this year, all of Singapore celebrated the epic victory. I feel proud to have been given a chance to put our republic on the global map again – all thanks to Tata Communications and Formula 1.

I have been hooked on Formula 1 since I was a teenager. I remember watching the championship battle between Michael Schumacher and Mika Häkkinen in the late nineties for the first time on television. Totally fascinated with the sport, I began playing F1 video games on PlayStation with an aspiration to be a Formula 1 driver one day. I turned out to be a decent performer and began to compete in various racing simulator competitions in Singapore. My dream came true when I had a chance to sit behind the wheel and drive the Formula 3 & Formula 1 AGS JH25 in 1990 in Circuit Du Luc, France.

It was the 2014 Singapore Formula 1 Grand Prix that gave me the idea of using virtual reality (VR) to take the racing experience to the fans at home. Having been invited for a garage tour at the Marina Bay Street Circuit, I recorded the entire experience on an over-the-shoulder camera. In one of the paddock footage frames, the camera also recorded Lewis Hamilton where he walked pass the garage. I realised that this recording could be used to break the traditional television viewing of live sports and actually transform it into a unique experience for fans anywhere in the world.

When I heard about the F1 Connectivity Innovation Prize this year I jumped at the thought of presenting my idea to the expert jury. Here’s my idea in brief:

As we all know, a sports commentator on television today delivers the information from each Grand Prix through a mix of visual content and narration. But no matter how great that commentator is, there is a lack of immersion and engagement between both the elements because the viewing angle of the moving pictures is only within a 70-degree angle. This forces the story to rely heavily on narration rather than visual footage.

My concept of ‘roaming commentators’ overcomes the limitations of a traditional television broadcast. It uses VR to deliver a 360-degree visual experience of the F1 trackside to the fans at home. Fans can use their mobile phones, laptops or VR gadgets to enjoy the experience. The interactive visual content is generated from the VR recording equipment on an over-the-shoulder monopod, attached to a group of on-site roaming commentators. These commentators deliver story, drama, information and news via verbal or hand gestures as the action unfolds. It is important to note that such a concept demands a huge amount of bandwidth for delivering full 4K UHD video quality and a great user experience for fans. Yet, Tata Communications, with its global superfast infrastructure, could carry the data needed from anywhere in the world to make this concept real. 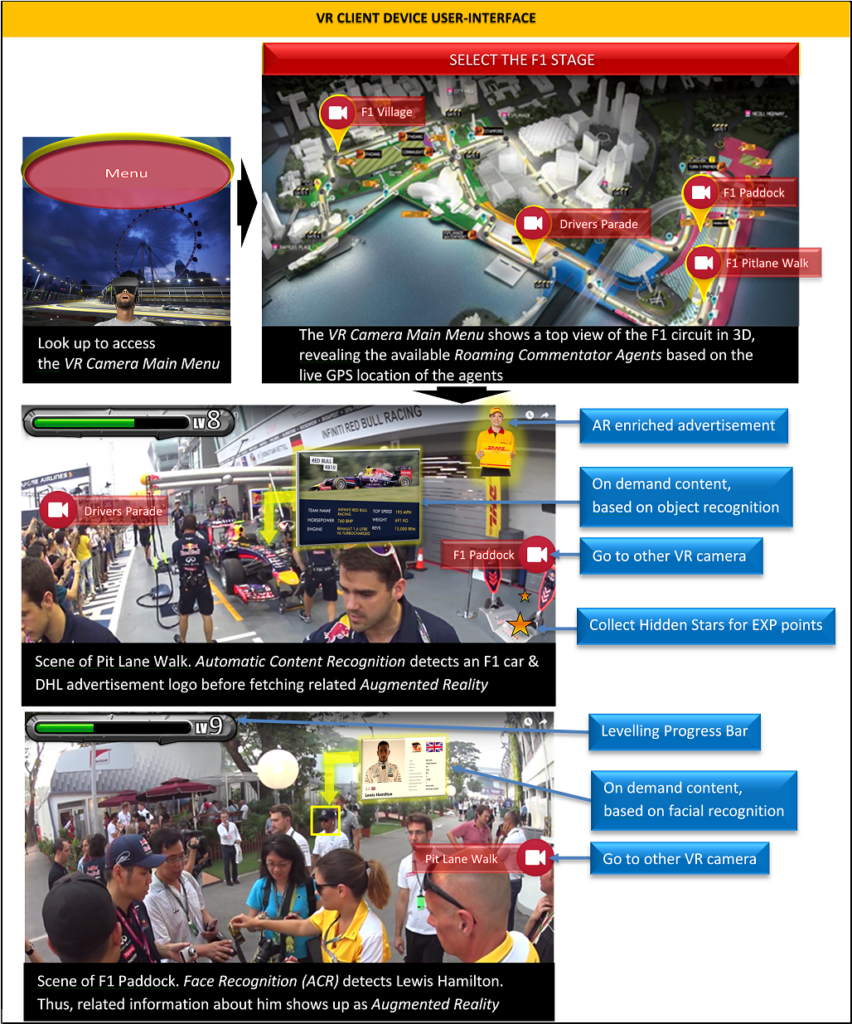 An additional component of my idea uses augmented reality (AR) to provide more information on a set of predetermined visual objects, such as a race car or driver, as soon as it pops up on the screen – just like how Lewis Hamilton did in my 2014 Singapore Grand Prix recording!

This way, my solution creates an immersive, interactive and engaging user experience.

It is clear that F1 is the most powerful showcase of technological innovation. Being a gamer and designer myself, I know that VR and AR can further boost this innovation by increasing the level of interactivity between the fans and the sport. It’s exciting to see that the advanced technology now exists, all underpinned by superfast networks, to enable us to harness the power of VR and AR to digitally capture every moment and bring fans the world over closer to the action than ever before.

How do you see Yoga’s idea shaping the future of F1 viewing? Let us know your thoughts in the comments below.