Robotics and girl power: interview with Girls of Steel

As part of Tata Communications’ aim to drive innovation in digital technologies and promote diversity, the company supported the East Barnet School’s all-female robotics team at the VEX Robotics Championship. Here, we interview the team on the secret behind their recent success and their ambitions for the future.

Who are the Girls of Steel, and how did you get into robotics?

We are an all-girls robotics team from East Barnet School, Hertfordshire. We got involved in Robotics in early July last year. Helaina is our programmer and builder; Sita is our programmer, builder and driver; Daisy is our Chief Builder; and Abi is our designer and responsible for team media. Sita and Abi were asked by their technology teachers if they would be interested in forming their own robotics team. Initially we weren’t sure but decided to give it a go. It didn’t take long for us to get very passionate about robotics – it’s something that we all really enjoy now.

How did East Barnet School get involved in robotics?

Back in 2011, our tech-enthusiast teacher Mr Sadler was researching new, fun ways to enhance the design and technology curriculum. As part of his research, he managed to persuade the MD of Innovation First to give the schools technology department four VEX Robotics kits – and things progressed quickly from there. At that time he was also in talks with the CEO of Autodesk at a digital design and technology event, and the company offered to make their CAD software free to schools in the UK. In early 2012, the EBS Robotics club was officially launched. A series of robotics videos put together by Mr Sadler soon captured the interest of lots of students at our school, including ourselves. We now use the VEX Robotics Design System to learn Science Technology Engineering and Maths (STEM) subjects in a cool, different way. 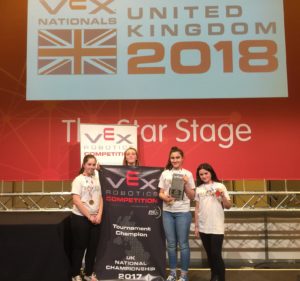 What is VEX Robotics Championship all about?

It’s the largest middle school and high school robotics competition in the world. There are now over 15,000 teams taking part from 40 countries worldwide. We design, build and program a fully functioning robot embedded with autonomous programming from the ground up that competes in a specific game. The UK national finals took place at The Big Bang Fair in Birmingham. There, we competed against 40 other teams from across the UK over two days – and we won! As the UK National Champions, we went on to represent the UK at the VEX Robotics World Championships in the US.

It’s not just about robotics though. It’s about getting more students excited about STEM, which we’ve really seen happen at our school. It’s cool to actually see what we are learning about STEM subjects by getting hands-on with the VEX Robotics system. It also gives us a chance to experience teamwork, competition, collaboration, and the high intensity of working to deadlines to be prepared for the competition. It’s also developed our communication, our thinking, problem solving, presentation skills and so much more.

Are there lots of girls taking part in VEX Robotics?

Our teacher Mr Sadler was the first teacher in the UK to put together an All-Girl VEX Robotics Team, called VEX Impact from East Barnet School. The number of girls competing in VEX Robotics is going up, but we feel that more girls should get involved. It might even inspire them to consider a future career in STEM. It has already inspired us to choose GCSE Engineering or GCSE Product Design for our options. We now also have a larger number of Year 7 girls in our school whom we have also inspired. So we are happy that we are having an effect on change in STEM subjects. 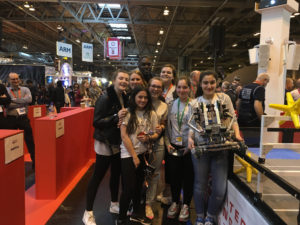 What does your robot do?

Our robot was designed around the game ‘Star Struck’. The aim is to pick up stars and cubes and throw them over a fence on to the opponent’s side. Our claw is curved, so it picks up more stars in one go. We also added elastic bands to give the claw more grip, allowing it to hold on to the stars and cubes. All of our motors on the drive are geared for speed, which means it can move around the arena faster. This helps our robot to get to stars and cubes at a quicker pace. We have also designed a lift mechanism which has a gear ratio of 1:7, which allows us to lift the game objects. We also use a piece of programming software called Robot C to program our cortex controller. This is like the main brain of our robot to which all our sensors and motors attach to. With help from our teacher and mentors, we were able to fully program multiple autonomous programs for our robot.

What have you enjoyed the most about robotics?

Being part of the EBS Robotics Club has taught us many new skills. These include things like teamwork, organisation, problem solving, leadership, time management, designing, autonomous programming and engineering. These skills not only helped us become UK National Champions – we think they will help us in the future too. Experiencing VEX Robotics has made us all passionate about STEM and we all now aspire to have a career in technology, robotics or artificial intelligence. It’s exciting to think what our world will be like in just a decade, thanks to exciting areas like robotics and artificial intelligence. We think these particular technologies will revolutionise the world and the way we live our daily lives, and we can’t wait to help make it happen and be a part of it.

To read more about innovation, read some of our other blog highlights.