The Ovum view: drivers and challenges for IoT in manufacturing sector

Today’s increasingly digital manufacturing sector, also known as Industry 4.0, has been identified by Ovum as one of the fastest-growing and highest-impact areas for the deployment of the Internet of Things (IoT).  In our recent IoT Enterprise Insight Survey, we surveyed nearly 1,350 enterprises in 14 countries globally, focusing on organisations that are already in the process of rolling out IoT solutions.  Our objective was to understand their drivers, challenges, technology approaches and planned investment in IoT.

Demonstrating the strategically important role of IoT applications in the manufacturing and industrial sector, these respondents were significantly more likely than their peers in other sectors to have C-level leadership for their IoT initiatives. Close to half (45%) of companies in this space reported that their IoT strategy was led by the board, CEO, CIO or CTO. In fact, only in the energy and utilities industry were respondents more likely to have this level of senior leadership.

We also asked respondents to tell us what their most important goals were in deploying IoT solutions.  Cost reduction came out strongly on top, followed by improving business processes.  More aspirational goals such as changing the company’s business model, or monetising IoT data, were less commonly selected, indicating enterprises are looking for some clear short-term gains from IoT. 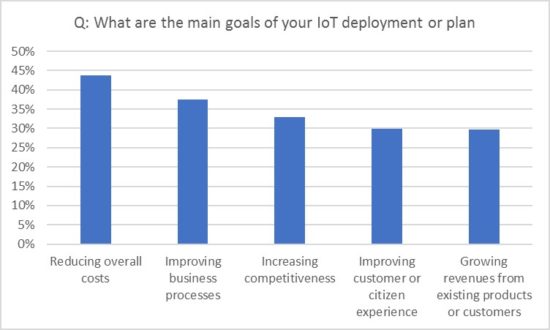 The most important driver for IoT deployments in the manufacturing and industrial sector is cost reduction, but that is followed closely by process improvement, increasing competitiveness, and improving customer experience.  As one manufacturer told us:

“The biggest thing for us, to be honest, is customer satisfaction, which is really driving us as a differentiator.  We think deploying this technology can move us up the value chain with customers.”

In this particular case, the manufacturer is using sensor-enabled technology to track the progress and performance of a cleaning device moving through an oil pipeline – a purely B2B application and not what one would think of as a typical use case for improving customer satisfaction.  But the IoT data generated by the connected device is being used to understand many other elements besides simply its speed of progress and location. These are then analysed and fed back to both customer service and sales teams to enable greater insight, more effective service, and a stickier customer relationship.

Manufacturing and industrial companies also report that the greatest risk to successful IoT deployment is the complexity of integrating IoT solutions with their existing business processes – an important point for IoT providers to bear in mind as they work with companies in this sector.  Technical enablement and excellence are critical ingredients needed for IoT solutions to have the desired impact, but providing support on organisational and business process change will be just as important to enabling a successful outcome for industrial IoT customers.# 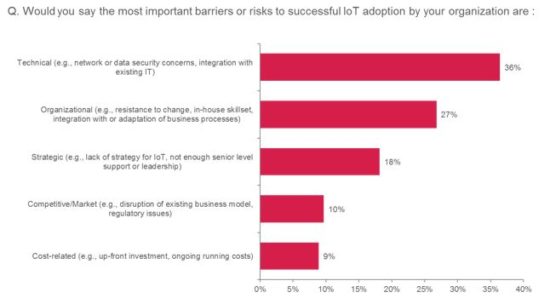 Ultimately, there is great diversity of IoT applications and use cases, even within a single industry sector.  Manufacturing and industrial firms have been early adopters of IoT, and some of the more common applications being deployed include remote monitoring, asset tracking, predictive maintenance, and factory operations control.  The first three of these can effectively be seen as horizontal applications, as they are deployed across a variety of both industries and use cases.  As such, providers may hope to see some scale effects, as these continue to develop.

Yet, the market is still in the relatively early development stage. Ovum’s view is that manufacturing and industrial companies need to work with the right partners with the ability to develop and support industry-specific requirements – that will be a key ingredient for successful IoT projects.

Read one of our previous blogs on the Future Forward view.