Teeing up the European Tour for digital success

The European Tour is not alone in its desire to change the conversation happening around golf, help attract new, younger fans, and evolve from a sports competition to an entertainment brand. Yet, unlike many other global sports organisations, we are in the unique position of having seen our audience increase in recent times.

Some of this could perhaps be attributed to golf’s inclusion in the Rio 2016 Olympic Games – that helped bring in new audiences who had never watched golf before. For a global competition with its roots in Europe, the knock-on effect of more than three billion people watching a Brit, Justin Rose, win gold and a Swede, Henrik Stenson, win silver, is palpable. Given the huge social media followings of individual players, connecting new golf fans with their favourite personalities makes them feel more involved with the stars of the sport.

However, a large part of this can also be attributed to the European Tour’s desire to lead the transformation of global golf – an approach which puts content at the centre of everything we do, and which is built around the talent and characters of our players. Despite highlights such as the Olympics, the wider trend in sports broadcasting overall has been one of declining engagement. Yet, the European Tour has bucked this trend, increasing not only broadcast figures but witnessing significant growth on social media. Undoubtedly, technology is critical in this changing landscape.

People who are able to attend golf competitions are in the minority. Tournaments traditionally last four days and happen over multiple stages, so given the time constraints which most people face in their working and personal lives, we need to find new ways of connecting them to the sport.

To create a more exciting future for the European Tour, we also want to find new ways to keep loyal fans engaged, and broaden our reach through new formats to attract different types of audiences through different platforms. 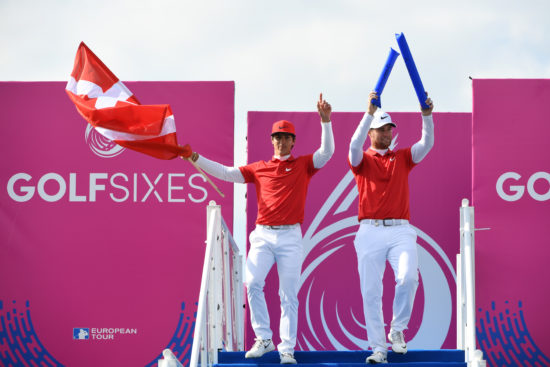 One example of this is short-form tournaments such as Golf Sixes. Held for the first time in 2017, the event, which sees players compete in teams over six-hole match play, attracted a new, younger audience to the sport, with the average age 14% lower than normal European Tour events. Social media engagement around the event also exceeded the average rate seen at other European Tour tournaments by 24 percent, delivering more than 20 million social impressions. This May, GolfSixes will continue to push boundaries, with men and women competing side by side.

We are also creating compelling content for distribution globally to our fans, so they can follow the sport in bitesize chunks, whenever and wherever works best for them. An example of this is our Shot Clock Masters taking place in Austria later this year. By encouraging a faster pace of play, we are demanding less of a time investment from our viewers, so that they can get their golf ‘fix’ without spending the whole weekend in front of the TV.

Another example is The Hero Challenge, which is played over one hole. Players are faced with a specially-created platform tee -and for the most recent iteration of this tournament, held in Dubai, a floating target in the ocean, – surrounded by atmospheric pyrotechnics and smoke, all under lights. These events are typically live-streamed for our fans on Twitter – which shows how we are also looking beyond traditional TV to broaden our appeal amongst digitally-savvy, younger audiences.

Using tech as our driver

At the European Tour, we’re always curious to see how other sports are testing new disruptive technologies, and what we could learn from our peers. For example, it’s interesting to see how combining shorter, faster formats with technology have opened a world of commercial opportunity to Twenty20 cricket. Tournaments such as the Indian Premier League (IPL), the Big Bash and T20 blast have added a new dimension to a sport that makes 80 percent of its revenue from broadcasting rights. These tournaments have used technology to drive engagement: whether it’s micing up players or creating a social media frenzy.

Ultimately, we want golf to be a true spectator experience for viewers of all ages, cultures and walks of life. Mixing up the format of play and types of content we can deliver to fans is vital to this, and this is where technology comes in.

Imagine if fans onsite could use immersive reality applications on their mobile device to get up close and personal with their favourite star’s last swing. Or, if you could use historical data to predict whether a player will par a hole or how many shots he or she will take over the full tournament.

Could we connect golf clubs using sensors and understand the G-force behind a big drive and package this up for use on social media? These are the types of questions we must ask ourselves to drive the sport forward using technology.

The fairway to transformation

Consistency is key when it comes to fan experience. Sports such as golf have enjoyed the loyalty of its hardcore fans for a long time, but the modern consumer of sport is only loyal to their most recent experience. From a technology perspective, this presents a challenge given that the European Tour’s Race to Dubai – our global season-long schedule – boasts 47 events which take place across 30 countries.

Rather than manage a huge ecosystem of suppliers, our partnership with Tata Communications gives us economies of scale and a level of consistency which allows us to innovate with confidence. Together, we are looking to trial connected technologies such as virtual and augmented reality (VR, AR) and our partnership not only means that we have the capability to deliver these technologies but also the experience to deliver them flawlessly.

It’s an exciting time, not just for the European Tour, but for fans of golf and sport more generally. The combination of exposing golf to new viewers and building the profile of top golfers, as well as using new formats and how content is delivered has the potential to be very special.