How tech is empowering women around the world

As International Women’s Day 2020 approaches, Chief Technology Officer Genius Wong gives us the low-down on how different technology is empowering women across the globe, but also where there are hurdles still to overcome. 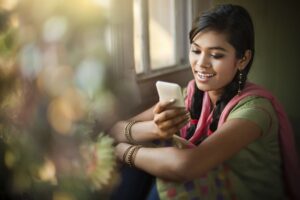 It’s no secret that women are chronically underrepresented in the technology industry. A 2018 McKinsey report found that women made up just 26% of the computing workforce in the US, with white and Asian men in particular disproportionately represented in comparison. The problem is exacerbated for black, Asian and minority ethnic women, who hold just 4% of technical roles in tech companies in the country, and are almost entirely absent from senior leadership positions.

Elsewhere, things look a bit better, with 35% of people in specialist technology roles in India being women. That also compares favourably to the UK, where the figure is just 17%.

“There are areas, though, where technology is having a positive impact on gender equality.”

In countries such as India, Egypt and South Korea – where women can face structural barriers that limit their ability to participate in society on the same level as their male counterparts – technology can help them overcome societal restrictions. Social media has also played a huge part in giving a voice to women in countries that traditionally don’t allow them opportunities to speak out. Women – especially those that live in isolated rural areas where patriarchal systems are particularly influential – have taken advantage of WhatsApp, Facebook, Twitter and Instagram to join protest movements across the world.

Organisations such as Media Matters for Women (MMW) use technology to allow some of the world’s toughest-to-reach communities to join the global conversation. MMW currently operates in the Democratic Republic of Congo and Sierra Leone, with plans to expand into Liberia, Guinea, Rwanda, Burundi and Tanzania, and uses podcasting technology and mobile phones to deliver news and information to women and girls in a way that taps into the continent’s culture of sharing music. Common topics include gender-based violence, teen pregnancy, participatory democracy and income generation, which then inspire discussions and help empower listeners to get involved. Simply having access to a smartphone can have a transformative effect on the life of a woman living in an underserved region, particularly if they can use it to gain financial independence. In 2015, Tata Communications partnered with Trickle Up on its Mpowered project in Odisha and Jharkhand, providing 1,800 women living in extreme poverty with mobile phones loaded with a livelihoods coaching application. Along with the training required to use the devices, this not only led to an increase in their annual income, but gave the government and other providers a clearer idea of the day-to-day needs of their families. A similar Tata Communications project in Pune involved opening two digital literacy centres in partnership with the Idea Foundation to teach local women the basics of the internet and computer use.

In the Philippines, where 37% of municipalities have no banking facilities, many women who run home-based ‘sari-sari’ convenience stores now use Android smartphones to also offer mobile financial services to their customers, adding a valuable new revenue stream for themselves and contributing to the economic growth of their communities.

Similar success has been seen in Africa, where the mobile money service M-Pesa has 37 million users across seven countries. It allows people across the continent to carry cash more safely and send and receive payments securely via text message. Since its launch in 2007, the service has been credited with lifting 194,000 Kenyan households out of extreme poverty, but its impact has been particularly felt in those headed by women.

“According to a World Economic Forum report, improving gender parity can have a significant impact on global GDP – but there are still significant hurdles to overcome.” Globally, 327 million fewer women than men have a smartphone, but the gaps are biggest in Africa (34% of women are less likely to own one than men) and South Asia (70% less likely).

In many places there are entrenched cultural and societal reasons for this disparity – so improving access, affordability and digital literacy for women can only help. Over time, this would see more women enter the technology industry too: innovations that come from gender diverse teams have been shown to have a greater impact with higher economic value, proving that everyone is set to benefit from closing the gap.

Read this blog post by Genius where she examines whether internet access should be seen as a fundamental human right.