In this piece, we celebrate the kids who’ve used their creativity and entrepreneurial spirit to find fascinating solutions to many of the problems we’re facing – from devices to help enforce social distancing, to very affordable ventilators made from parts sourced locally.

Every year, it seems children are becoming more intelligent, innovative and compassionate.

And with most young people today, digitally-native – born into an already digital world – they also have more potential than ever before to push us forward technologically.

At present, the world stands face-to-face with a global pandemic the likes of which we haven’t seen in decades. And while large enterprises and governments are working hard to face this challenge, it’s also being taken head on by numerous young innovators all around the world. 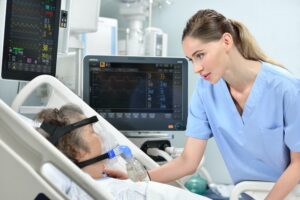 Two young brothers from Haryana’s Ambala district created a portable ventilator with knowledge they gained in a robotics class. And as if that wasn’t impressive enough, they made one that took social distancing measures into account!

The ventilator is enclosed in a wooden frame which, when compressed, pumps up a ball housed inside. The ball is connected to a motor and circuit which helps to pump that ball, making the entire process automatic.

The entire setup links to a mobile app that allows for remote monitoring. It’s already been trialled in a busy hospital and the brothers are currently talking to medical professionals for advice on how to make it commercially viable.

Technology student Rayvon Stewart devised a simple way to prevent the spread of the bacteria and viruses through contaminated surfaces. Originally thought up to help prevent deaths from infection in new-borns, the device has proved to be equally effective on Covid-19.

After doing a bit of research on which surfaces were most likely to contribute to the passing of pathogens, Rayvon created Xermosol – a device fitted to doors that automatically disinfects handles with ultraviolet light after each use. Tests so far have shown it to be more than 99.9% effective at killing pathogens. It’s easy to install and can be used in hospitals, schools, and workplaces.

Rayvon has been struggling to get funding for the mass production of his device. But it was recognised by the Commonwealth Health Innovation Awards and he hopes this will boost interest in Xermsol.

A group of South Korean students in their early twenties have developed a set of contact tracing technologies to help track the spread of the virus within the country. 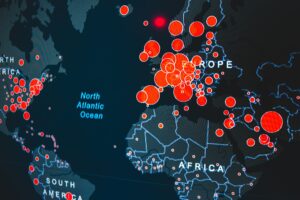 After a year learning programming together, they decided to put their skills to the test when South Korea became an early epicentre in the pandemic. They were concerned about the limitations in the format of the information being shared with the general public.

So, they created a website called ‘Corona-nearby’ which lays the information on a map to help people know which places are safe to visit. It uses location services of the devices to track areas where confirmed Covid-19 patients have recently been.

They also created ‘Corona map’ as a way to monitor Covid-19 clusters, but this also focuses on dispelling misinformation created on social media platforms. It does this by using raw data from the Korea Centers for Disease Control and Prevention (KCDC) and plotting it on a map.

The young inventors said they’ve received lots of positive feedback and appreciation for their websites. The deep sense of pride, they said, has motivated them to continue working in the public interest until Covid-19 is a thing of the past in South Korea.

Ezedine was already a prolific inventor before the Covid-19 pandemic came around. At only 18, he had more than 30 inventions under his belt. 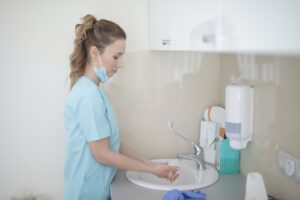 However, since Covid-19 started to become a global issue, Ezedine realised his creative mind could be beneficial to his community.

The first pandemic-related invention he put forward was a contactless soap dispenser. It had an in-built sensor to remove the need for buttons and was also equipped with a manual pedal so the device could also still be used during blackout.

It was a success and more than 50 of them were installed in businesses, hospitals and the university in and around the rural town outside Addis Ababa, the capital of Ethiopia.

But he was just getting started.

Ezedine, who is from a rural town outside Addis Ababa, knew the 557 ventilators, the entire nation had wouldn’t be enough if the situation got worse. So, he searched an open source online manual and built a mechanical ventilator with an Artificial Manual Breathing Unit (AMBU) bag, all of which is controlled from a mobile app.

He hopes once the prototype is completed, it will be used in local communities. However, he still faces issues getting it mass produced, and hopes he’ll eventually receive some investment from either the Ethiopian government or private investors.

Covid-19 has underlined the difference that everyone can make in coming together to combat the crisis. And with their technical skills and impressive inventiveness, young people around the world are making an incredible contribution to the effort.

Discover more about the power of diverse minds and its impact on creativity in our blog, Diverse thinking – The key to creativity and innovation.