Turbulence in the cloud? Here’s why it happens and what to do about it

If you’re wondering why you haven’t had the benefits you wanted out of cloud, you’re not alone.

Many organisations rushed to cloud, thinking it would be the answer to all their problems, only to find it didn’t deliver what they hoped for and actually created more complexity.

In the first wave of cloud, some companies simply bought a few virtual machines on a hyperscaler, moved what apps they could onto it and waited for the savings. Others used public/private hybrid clouds and were more ambitious in the apps they migrated, but still found that unforeseen complications awaited them.

Many early adopters suffered from loss of visibility and poor user experience. While some costs did reduce, others rose, and any savings were quickly undermined by operational ramifications and poor levels of service.

Investing effort, resources and capital into something that doesn’t end work effectively is one of the biggest frustrations when managing a business. The key to solving this, and ensuring the same mistakes aren’t repeated, is understanding why and from where a problem originates.

The reason cloud hasn’t delivered the benefits these organisations expected is because they didn’t go about it systematically. Their lift-and-shift approach overlooked some important architectural considerations, particularly around networking, security and operations.

Before cloud came along, organisations generally had a data centre-centric architecture. Corporate applications lived in the company’s own data centre, and users connected to them over private networks. Internet access was possible, but only from behind heavy central security.

Moving to the cloud without re-architecting the network has led to inefficiencies, poor service and increased costs. For example, forcing data traffic back to the data centre before breaking out to the cloud makes apps run slower and pushes up WAN costs. Meanwhile, security architectures designed for central breakout struggle to cope in the cloud world – operational support also gets more complicated when things aren’t under the organisation’s control.

Add to this the complexities of Bring Your Own Device (BOYD), shadow IT, and users opening personal accounts on public SaaS services, and you can see why companies who thought they could simply ‘move to the cloud’, haven’t achieved their desired outcomes.

What to do about it

The good news is that there are many successful implementations of cloud, where the transition was done strategically. These companies thought not just which apps to move where, but how they needed to re-architect their networks and security. As a result, they’ve reaped the benefits.

Generally, success stories like these happen when the organisation follows a planned journey to move, operate and innovate on cloud through a series of carefully orchestrated steps. These are to assess their current digital estate, plan the best approach to move, and migrate without disrupting operations. Then they manage the routine, optimise redundancy, and re-innovate to upgrade.

To illustrate, Robert Bosch Engineering and Business Solutions (RBEI) wanted to consolidate its disparate network systems across India onto one unified platform – without raising costs or impacting on the core business.  By working on one centralised platform, the company has enhanced staff collaboration and productivity, reinforced security and eased network management issues, ultimately reducing capital expenditure and operational expenses.

Another example is Infiniti Retail Group. When the company found that emerging discount challengers were having a detrimental impact on its market share within the Indian retail sector, it decided to adopt a hybrid cloud architecture to give it more flexibility with computing capacity – reducing or expanding with ease. 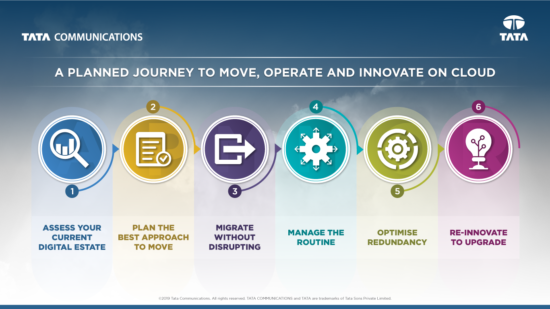 Successful organisations avoid turbulence in their cloud journey by following a methodology like these examples above. They’re clear about their cloud strategy and business drivers, know if they want to focus on public, private or hybrid cloud, and if they tend towards IaaS, SaaS or PaaS. They assess how virtualised their infrastructure is to begin with, and which workloads they’d like to move. They’re also very clear about what is, and isn’t, possible within their regulatory environment.

Cloud winners design security into their cloud architecture at the outset too. They think about how they’ll accommodate their future plans for DevOps, APIs and containers. They know if they’ll want their applications to run across hybrid clouds, and how they’ll manage back up. Finally, they don’t forget about setting up a new model of operational support and service management for their new environment.

While businesses are keen to embrace technologies that promise increased output and more convenience, it is important to carefully consider core business needs, limitations and future objectives. By marrying this with focused planning and a customised approach, organisations can successfully migrate to the right type of cloud architecture which will help it to thrive.

To learn about the evolution of the Internet from dialup days to a business-critical platform, read Raj’s previous blog here.