Celebrating our 150 races in F1: how the past energises the future

Mehul Kapadia reflects on the partnership between Tata Communications and Formula 1 ahead of this weekend’s German Grand Prix.

Very few sports can boast a history as rich, vibrant and fascinating as Formula 1. From the early years to the F1 we know and love today, it’s probably fair to say that more things have changed than have stayed the same.

The grainy, black and white footage of previous eras is in sharp contrast to today’s ultra-high definition multi-colour spectacle enjoyed by a global audience of around 1.3 billion people. Looking back on the birth of this sport, I often wonder what its pioneers would make of the global phenomenon that F1 has become today – I very much hope they’d approve.

Often, it’s significant landmarks which encourage us to reflect on the past, and on 26th-28th July, the German Grand Prix race weekend will be Tata Communications’ 150th Grand Prix as the Official Connectivity Provider – and innovation partner – of F1.

Over the past eight years, we have grown with the sport alongside the expanding global F1 audience. When I look back at our very first race, which we supported with a team of just two people and a laptop, it’s almost unrecognisable from the significant presence – our onsite and remote crew – and cutting-edge technology we bring to every Grand Prix today.

From those humble beginnings, today we provide technology right across the F1 ecosystem, including Formula 1 itself, Mercedes-AMG Petronas, ROKiT Williams Racing and Sky Sports.

Despite how far we’ve come in our work with F1, it’s very important to me and the team that we don’t forget where we started. Looking back, those early days were characterised by determination and a can-do spirit. Sometimes we succeeded against adversity by sheer force of will.

“Our team has never forgotten what we learned in those early days: for F1, failure is simply not an option.”

We made it work because we were energised by our track record of past successes. We could look back at how we’d persevered to overcome tough situations, the team’s strength in depth, our expertise and our single-minded focus. Simply put: because we had triumphed over adversity before, we knew we could do it again.

As the racing teams gear up for the German Grand Prix race weekend, it strikes me that it’s that same focus which motivates the very best drivers. The single-mindedness. The ambition. The attention to detail. The unwavering commitment to the sport they love. The fact that the best of the best don’t always have unlimited reserves of previous successes which they can call on but always have that extra 1% of drive for winning.

When our partnership began, I don’t think any of us could have imagined the progress we would make together over the next 150 race weekends. The relationship has grown and evolved almost beyond recognition, enabling F1 to engage new fans, deepen existing fans’ immersion in the sport and giving teams the opportunity to excel on and off the circuit through the power of technology. We didn’t know how the relationship would develop at the outset, but we knew that we shared F1’s ambition to be the pinnacle of technological and operational excellence.

“Ultimately, we wanted to help deliver an incredible product, and all those races later, that ambition is still there like it was at race one.”

We still face challenges, of course. When the drivers are doing battle on the track, our team might be huddled in our control centre in an underground carpark in Monaco to ensure that no matter what, global audiences are able to enjoy the action in true real-time and that the teams in the pits can communicate with their drivers on the track and engineers all around the world.

Reflecting on the past to power the future

When the teams pack the cars into the trucks for the final time at the end of this season, we will all take the opportunity to pause and reflect on another year gone by. Just like the teams, we will evaluate successes, failures and learnings to take into next season. 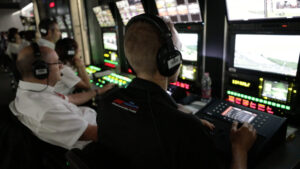 And, again, just like with the teams, the break between seasons is when some of the most important work happens at Tata Communications to prepare us for next year.

In April, F1 reached its own milestone of 1,000 races, and over the years, some things have changed while some things have stayed the same. Just like in 1950, it is still the zenith of sporting and technological achievement. The margins are tiny, and the gap between success and failure can be a matter of milliseconds. As such, it’s always been a uniquely challenging environment in which to operate.

“The difference today versus our first race is that now we are privileged to be able to benefit from 150 races of experience working with F1. That’s invaluable to help us meet future challenges head-on.”

We are all inspired by the drivers, teams and the sport itself, and we always look to them to maintain our ambition to achieve excellence, and the determination to do whatever it takes to get the job done. We are constantly energised and invigorated by knowing what’s gone before. So, as well as looking forward to this weekend in Germany we’ll also be looking back at how far we’ve come.